Innovations in assortment and growing methods through the years

A summary of decades of pioneering

By Peter van den Bosch (who is presently managing the company with his brother-in-law Henk van der Boog).

Dutch horticulture has developed by entrepreneurship and ongoing innovation. Grandfather and – later on – the firm have also contributed to that. And nowadays at Van der Boog & van den Bosch we’re still innovating. Moving along with trends has always been our goal, when the market demands change you need to adapt.

A summary at random 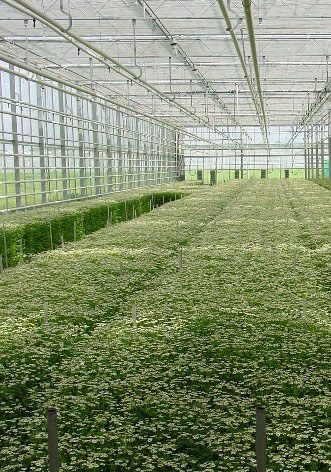 Grandfather started with product innovations in the crisis years before WW2. That was very needed those days to find new sources of income. He was one of the first to start growing cornflowers and daisies, combined with tulips in the winter. 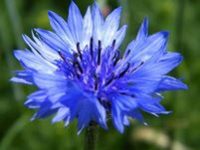 Cornflowers ( Centaurea cyanus ) have been grown again by Henk and me in the end of the seventies for an additional penny. A kind of revival of the crop, two generations later and that because those flowers were then popular for sales to Sweden.

In fact this was the first cooperation between us, that was done next to the jobs we had. And meant the step up to the later “Firm van der Boog & van den Bosch”. We still own the small book with the turnovers we daily made at the auction. 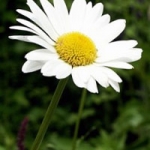 Daisies: Production of those have been continued after the war and my father Piet had made a special early flowering selection of that, which was used until the seventies. That selection was the first flowering in Rijnsburg, the cradle of all kinds of summer flowers. With that we could bring them – when the weather was nice – in the auction before (Dutch and German) mother’s day.
With the knowledge we have these days we know that the selection finally fell victim to degeneration and hence growing this crop has been ended. 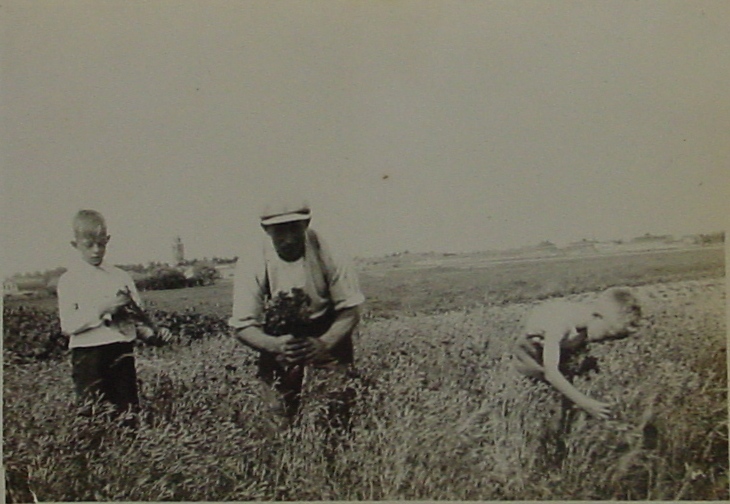 Carnations: A typical crop from the fifties and sixties. Most greenhouses were filled then with several colours of the American “Sim” series. Finally Fusarium root disease made an end to producing this crop.

Anthurium: That was the replacement for the carnations and Firm van den Bosch was one of the first in Holland to grow them. At first the young plants were made from seeds and in the greenhouse it was a mixture of colours and different plants types. Later on the reproduction from tissue culture replaced that from seeds, but they didn’t join that anymore, seeing mass production coming up. And the crop was getting expensive to grow with the rising energy prices.

Gerbera: Also a crop they were one of the first to grow in Holland. And again the same story as with Anthurium, mixed colours from seeds in the greenhouse and when cuttings and tissue culture came together with the inevitable mass production they stopped again. Root diseases were btw the second reason to stop. 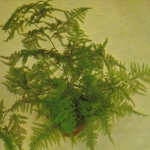 Asparagus: A trendy crop with feathery leafs that was used to add to a bunch of Freesia. When that wasn’t profitable they’ve tried it with “meyerii” (also Asparagus), but that wasn’t a success caused by too low production per plant and problems with weeds.
Japanese “band willow”: in fact a willow tree with deformed flat side branches, caused by fasciations. We’ve kept them short and grown these as shrubs to make it easy to harvest. It was trendy stuff in flower bouquets, but much volume to transport and finally flower traders didn’t buy them anymore for that.

Physostegia: By Dutch traders shortly called “Stegia”. My father had made a new variety of this perennial for open air production from a huge breeding program. The hybrid was made with a white and early July flowering parent, crossed with the purple “Bouquet rose” that floweres in the end of August. Their own variety “Van den Bosch” was lilac purple and flowered already in the first week of August, when no one had the crop in production. Big business of course and the crop remained in production until the nineties, when we didn’t have well drained fresh land anymore to grow them properly. 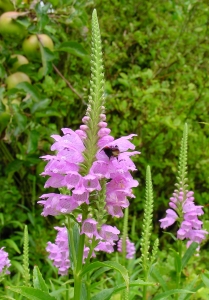 Perennial (double) Helianthus: To replace the “Stegia” we went into this Helianthus. Building up of enough plant material takes time, because reproduction from “land plants” works rather slow. But we had the luck that we were already busy with that. In 1996 we’ve sold the plants together with the land when we moved to the new greenhouses in Valkenburg.

In the eighties dried flowers were very popular. The whole village of Rijnsburg was involved in this booming business, including us. The advantage was that the dried product was long lasting and light weight in transport. But wow, this was dangerous for fire ! As a fire fighter I,ve seen several companies burn out in huge flames and we had a near miss ourselves when one day our dried stock went on fire. We were just in time to extinguish the first flames before it ran out of hand 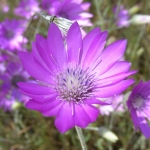 Purple paperflower and Rodanthe: The whole ceiling in the barn and even the heating house was pink of Rodanthe and purple (or white) of “paper flower” (Xeranthemum annuum, see picture).

Own selection of (flat) comb Statice tataricum: We went into tataricum on a large scale when my father had developed a variety that was easy to handle after drying, because the stems were less struck with each other. Enormous amounts have left the barns where we dried and handled this stuff that was used as a filler in dried mix bunches. This activity was ended in 1987 when the company split up and ownership went to us. The popularity of dried flowers was also decreasing in that period, so this was end of story.

The invention of 5C tulips: An innovation to absolutely memorize is the creation of the so called “5C tulips”, a new way to prepare bulbs to have them flowering in December. One subgroup within the tulip assortment was suitable for that, the “Darwin hybrids” with the best known variety “Apeldoorn” (red) and the colour mutants of that. This was developed together with the Dutch trial station/laboratory for bulbs in Lisse. Before this, cut flower tulips flowering at (and before) Christmas was impossible. Only the mini pot tulips “Brilliant Star” were in the market. This was a real break through! In the sixties I was just a boy, but followed the meetings that were held to over win the problems. It took them three years to adjust their bulbs preparing and culture problems. Finally in the second week of December 1965 they surprised everyone by bringing red tulips in the auction in the second week of December. In the beginning these were sold for amazing prices. The company has continued the tulip production until 1996, when we moved to the new greenhouses in Valkenburg. 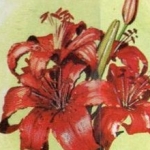 Asian lilies: In the beginning of the sixties the firm was the first in Holland to grow Lilium. After some experiments they bought very expensive bulbs from an American company called Jaan de Graaf to start large production. Those were “Asian lilies” in seven colours including varieties like “Enchantement” and “Tabasco”. This was a real breakthrough and in the auction they were overwhelmed, but perhaps the crop was a bit too new. Unfortunately they received about the same per stem as the bulbs had cost and left the crop after one season. That wasn’t very clever, one year later the market was ripe for lilies and a few others picked it up and earned an awful lot of money in the following years.

Various crops: And then a few crops shortly passed by and disappeared again for different reasons. That were e.g. small “Butterfly” Gladiolus en odd sowing crops like Gomphrena and Ipomopsis. That last one dropped the flowers when ripen and flower traders finally didn’t want them for that. Gomphrena is a funny crop, but difficult to grow and it doesn’t have strong stems. 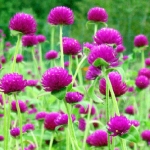 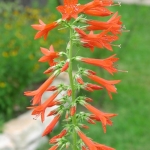 Potplants: That has been tried too. When decorative green plants became trendy, suddenly thin stems of Draceana arrived in the greenhouse. Those were imported from Brasil and we had to saw them in pieces to pot them, have them rooted and have them make side branches. While sawing aggressive tropical ants appeared and we had to drop that stem in water to drown them, because those big ants really did bite.

Finally the choice was to go on with pot plants and that should need a big investment. But the auction in Rijnsburg wasn’t a good place to market pots and that led to the decision to end this adventure.

Sown “Aster”: In fact this is Callistephus, but called “sown aster’ in Rijnsburg. We only know about that crop that there was a mixed colours selection of our own. When the company went into carnations they didn’t have time for this crop anymore and they tried to sell it to a large seeds trading company. But that didn’t happen and the seeds were finally thrown away.